Normally June is what we call the honey month. The bees bring in lots of nectar, resulting in lots of honey. Our June was pretty slow because the growing season was behind. We’ve caught a bit of timely rain and the prairies are going gangbusters. The prairie to the west of us is actually for seed production and right now the blazing star is phenomenal. Check this out!

We have one hive in particular, Thor, that is bonkers. Check out how many honey supers we have on top of the two hive bodies. Granted, Robin is short, but this is a tall hive right now!

And finally, we’re including a picture of a perfect frame of brood. Across the top is capped honey. A LOT of capped honey. Capped honey means the bees have put wax on the cells that are full of honey that is ‘done’. Below that is a band of pollen, also called bee bread. It is bright yellow in this picture. And finally, in the middle of the frame is the brood, or ‘baby bees’. Some have emerged – thus the open cells. Those that are still capped will be emerging shortly. In case you’re wondering, a queen lays 3 eggs a minute. Thor probably has 80,000+ bees right now – – really amazing numbers! 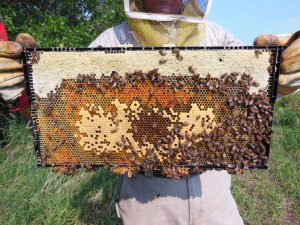 On the downside, it looks like the queen in Lars is gone. Too bad, Lars is a new hive this year, but was really doing well. The colony is in the process of requeening themselves, so we’ll keep a close eye on everything, but letting nature take its course. Lars has put up lots of honey, which is ideal, as we want all the hives to go into winter full-to-the-brim with honey.