The days are growing shorter and colder – that means it’s time to winterize the bees. Bees don’t hibernate, or enter into a suspended state, when the weather gets cold. The workers cluster around the queen, keeping it 80- 90 degrees around the queen for the duration of the winter. The feed on the honey they stored over the summer. A very harsh reality is that bees can starve to death because they won’t break away from the queen cluster to move over a few inches to get to more honey.

How do you winterize your bees? Most beekeepers put in an entrance-reducer, put a a piece of foam insulating board under the lid, and wrap up the whole hive in a layer of tar paper.  And, that’s exactly what we did last winter. But, we decided to step up our game this year, and went all-out, Cadillac style, this winter.

First, we invested in waxed-cardboard black boxes that fit over the hive bodies, with enough room to spare to put a piece of one-inch insulating board on each side, sandwiched between the hive and the cardboard. Then, a piece of 1.5 inch foam board is placed on top.

It’s also common practice to drill a hole in the face of the top hive body, so that if snow covers the normal entrance at the bottom of the hive, the bees can still get in a out via the upper hole. “Huh?” you say, “Why would bees want to leave the colony during the winter?” If it gets above 50 degrees the girls are going to fly. Honeybees are fastidious – – when it gets warm enough in the winter they go on ‘poop runs’ to clear out what has piled up on those cold days.  Because we have multiple layers thus winter (cardboard + insulation) Mark was concerned that shifting could occur, resulting in a blocked entry. So! After drilling the hole we installed a little piece of PVC and taped it in place to keep it from moving. 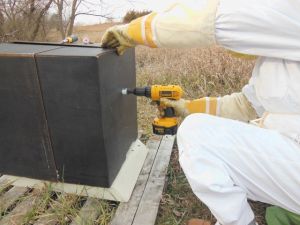 The reality is that our winterizing activities actually started about two months ago when we started feeding sugar syrup because we felt that the bees had not stored up enough honey for the winter, because the drought hindered the collection of flower nectar.

We’ll play the winter by ear. If it gets above 50 degrees and we can get to the hives, we’ll probably peek in to make sure honey stores haven’t dropped to dangerous levels and add a ‘winter patty’ for a little extra food supplement for the cold months. Right, we’re feeling really good about the state of Ole, Lena and Thor heading into the winter.

We're always looking for new adventures, and well, learning about beekeeping seemed like a good idea. We had one hive in 2011, and we've increased since then Our goal is 10ish colonies, but we haven't hit our mark quite yet. We've found talking with other beekeepers to be invaluable, so we're starting this blog to keep long-distance conversations rolling throughout the year. If we can figure out beekeeping, so can you!
View all posts by Idiots Keeping Bees »
← Ohhh Really.
Merry Christmas, Honey. →