RSS Feed
← The Green Frames
Ready for Winter. (we think) →

August Update, thorns and all

Well, we continue to have queen issues. No new news there. We had not been out to check on the girls for two weeks. This weekend we discovered that Thor, who is putting up the most honey, is now queenless. The bees were very calm, so we hope that means requeening is in the process. Another two hives that that had been trouble all summer long have finally righted themselves. Now, just survive the oncoming winter and bear some honey in 2017!

We plan to pull honey supers in two weeks. There’s some honey there, but as usual, not as much as we’d like to have found… 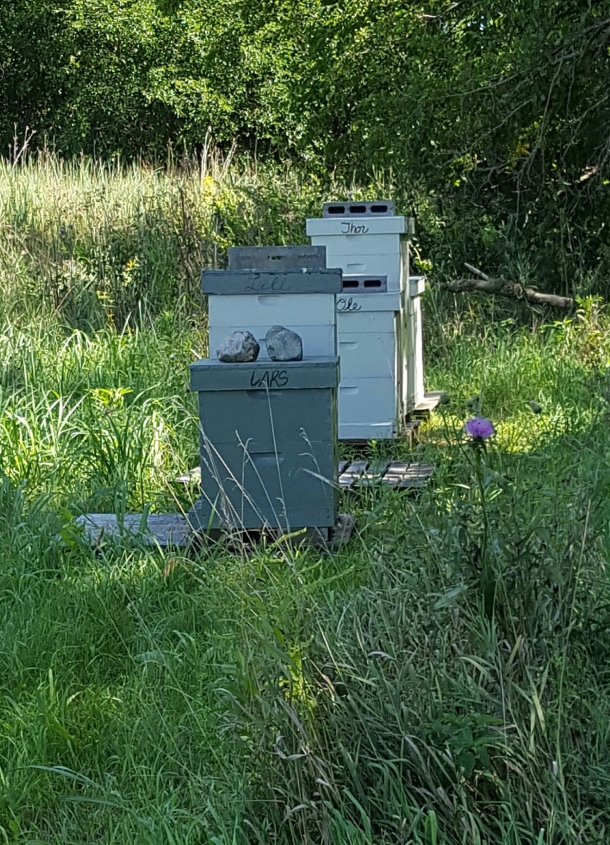 But here’s something complete different. Robin managed to find trouble while checking the bees, away from the bees. Somewhere out on the prairie there is a bypass pruner stuck in a thick thistle stem, right above a wasp nest. She hates thistles, as each plant can produce what seems like a billion-million seeds. So, while whacking down a monster on the prairie, in big bluestem that is as tall as her head, she noticed wasps pouring out of the nest, just six or so inches from the ground. RETREAT! RETREAT! RUN LIKE A NINNY! For once, she was not stung.

We're always looking for new adventures, and well, learning about beekeeping seemed like a good idea. We had one hive in 2011, and we've increased since then Our goal is 10ish colonies, but we haven't hit our mark quite yet. We've found talking with other beekeepers to be invaluable, so we're starting this blog to keep long-distance conversations rolling throughout the year. If we can figure out beekeeping, so can you!
View all posts by Idiots Keeping Bees »
← The Green Frames
Ready for Winter. (we think) →