RSS Feed
← Over the Hill (& creek) and Through the Woods to the Bees We Go
All Hail the New Queen. →

Un-Winterizing the Bees … and a basement booze update

We saw a 65+ degree day today in Iowa! (Of course, it may snow later this week too…) But today is a great day to get out to the bees (in a truck this time, not sledding across a field) and take off the insulating layers we put on last fall to help the bees survive the winter.

It was a beautiful sight, seeing so many bees in the air when we arrived. We fed more patties, as four of the five hives had mowed the last batch down. And, we flipped the hive bodies around, moving top to bottom, and did some general spring cleaning of the bottom boards. We saw lots of eggs and larvae, so that means they’re ramping up their numbers for the growing season. We didn’t take many pictures because once the hives were opened up there were thousands of bees in the air and Robin didn’t think running around with her glove off was in her best interest.

One mouse was living between the insulating black box and the hive body. It shot out and ran across both of our feet in a flash. When something runs across your foot in a flash, everyone gets pretty excited for a few seconds.

–  –  –  –
Saturday, we racked a bunch of mead (honey wine) that we started last fall. As you may remember, racking is moving the mead to a new bottle, leaving the layer of dead yeast, lees, behind. OF COURSE we taste test everything as we rack. Hic. In short, we liked everything, but it all needs a bit more mellowing. The cysers (apple cider + honey) were smooth and sweet. We added spices to a cyser that was previously unspiced, after comparing it to a spiced version. Cinnamon, cloves, nutmeg and orange peel. We have two versions of cherry + honey. One started with a ‘Juicy-Juice’ kind of base, and the other with the more expensive cherry juice concentrate. Both were good, but naturally, the expensive cherry starter is much better. Once racked, we added a bag of whole tart cherries to each bottle and put them back in the basement to further mellow. We have a 3-gallon bottle of spiced orange cider + honey perking along, and it is DELICIOUS. Robin likes sweet drinks and this one is right up her alley. 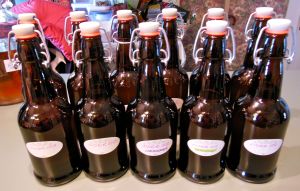 And finally, we bottled 11 bottles of the hard apple cider that we started last fall. We put a carbonation drops in a couple of bottles, and added molasses to a couple bottles in an effort to back-sweeten it. It will be interesting to see what the fruits of our labors taste like when we open the bottles the best couple of months.

We're always looking for new adventures, and well, learning about beekeeping seemed like a good idea. We had one hive in 2011, and we've increased since then Our goal is 10ish colonies, but we haven't hit our mark quite yet. We've found talking with other beekeepers to be invaluable, so we're starting this blog to keep long-distance conversations rolling throughout the year. If we can figure out beekeeping, so can you!
View all posts by Idiots Keeping Bees »
← Over the Hill (& creek) and Through the Woods to the Bees We Go
All Hail the New Queen. →