RSS Feed
← Un-Winterizing the Bees … and a basement booze update
Well, that was weird… →

All Hail the New Queen.

It’s been two weeks since we had an opportunity to check on the bees. Last weekend the weather was the pits, and there was simply no way we could open the hives in the rain and cold weather. So, we wondered what kind of mess we’d find this weekend. Did the bees go a little stir crazy, cooped up during the rainy and cloudy days, and start to build queen cells in preparation to swarm?

The bad news of the day was that one hive, Thor, is queenless. And, apparently lacking a queen for a good length of time as there were no eggs or even brood (baby bees). So, today we hopped down to Perry and picked up a new queen. We got home in time to put it in the hive. We also pulled a couple nice frames of well-developed brood from Lena and Ole, and put it in Lars, so that bees will be emerge soon, bolstering Lars’ population. Fingers crossed! We’ll check the progress on release of the queen in the next 24-48 hours.

This is what it looks like when you get a queen bee in the mail.

The queen is in the cage, with a hard candy plug in the bottom. Once accepted by the colony, the bees will eat the candy, releasing the queen. The queen’s attendants surround her on the outside of the cage. 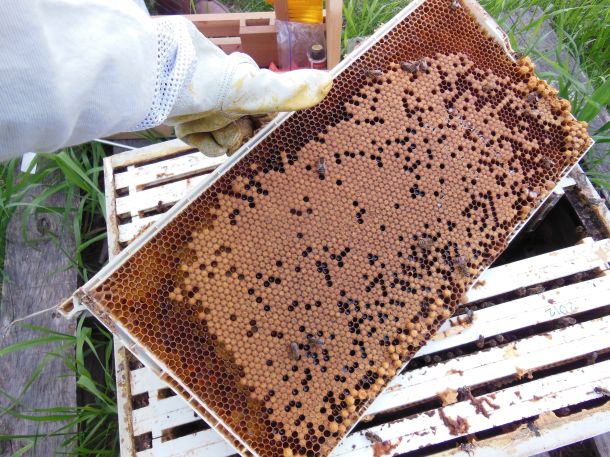 We pulled two frames of capped brood from other hives (thanks Ole & Lena) and placed them in Lars, with the new queen.

If you look closely, the queen is in the right end of the cage. 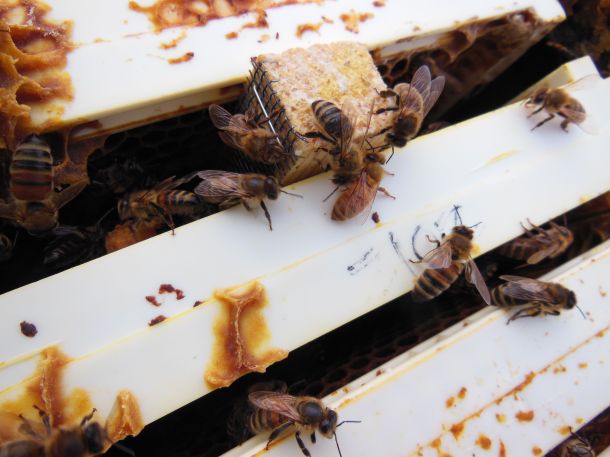 The queen cage is installed between the two frames of brood. Bees immediately clamored onto the cage and tongues were immediatly evident – a good sign as acceptance.

We're always looking for new adventures, and well, learning about beekeeping seemed like a good idea. We had one hive in 2011, and we've increased since then Our goal is 10ish colonies, but we haven't hit our mark quite yet. We've found talking with other beekeepers to be invaluable, so we're starting this blog to keep long-distance conversations rolling throughout the year. If we can figure out beekeeping, so can you!
View all posts by Idiots Keeping Bees »
← Un-Winterizing the Bees … and a basement booze update
Well, that was weird… →